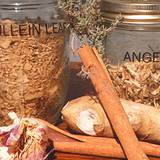 Pour 1 cup of boilig water over 1 - 2 teaspoons of dried mullein flowers and leaves. Cover and steep for 10 - 15 minutes. Pour the liquid through a find cloth or a coffee filter to strain out the plant's tiny hairs and fuzz, whish can irritate the throat.

You can drink up to 3 cups of mullein tea daily. Sweeten the tea with honey, if desired.

Caution Do not use mullein that has been harvested from parking lots or along roadways, sine it may contain toxins.

Prepare the tea as directed above for a soothing, naturally sweet expectorant blend that will help alleviate even the most stubborn, hacking coughs.

Prepare the tea as directed above to help ease symptoms of common cold. the formula is particularly well suited for people who quickly develop bronchial problems whenever they get a simple cold.

Prepare the tea mixture as directed above. This blend, along with a good diet, generous amounts of sugar-free liquids and stress reduction, helps the liver filter out toxins and cleanses the skin.

Mullein leaf tea has a soothing effect on the urinary tract and facilitates urination. It also eases a nervous, irritable bladder and incontinence. Prepare mullein tea as directed above and drink 3 - 4 cups daily.

For hemorrhoidal irritation or perineal itching, prepare a strong Mullein Tea recipe with 4 tablespoons of mullein flowers and 1 quart of water. Steep until cool, and make sure you strain it thoroughly. Add the liquid to a sitz bath or dip a clean cloth in the tea; apply to affected areas 3 - 4 times a day or after urinating.

A compress of mullein flowers relieves bruises, rashes, and skin irritation. Pour 1 cup of boiling water over 1 tablespoon of dried flowers and cover. Let it steep until cool and strain. Soak a clean cloth in the tea, wring it out and place it on the affected areas. cover the compress with plastic wrap. Change it twice daily.

Add a handful of mullein flowers toa bowl of hot water. cover your head with a towel and deeply inhale the vapors.

The statements made here have not been approved by the Food and Drug Administration. These statements are not intended to diagnose, treat or cure or prevent any disease. This notice is required by the Federal Food, Drug and Cosmetic Act.